All Refrigerant equipment share the same theory of refrigeration circuit. Four steps are required to implement the refrigeration circuit step 1:Refrigerant refrigerant enters the compressor and becomes high-temperature high-pressure vapor or gas. 2.The gas enters the condenser where excess heat is rejected by imported ambient cooler air over the tubes and transformed into a high-pressure liquid with lower temperature. 3.The high-pressure refrigerant passes through a service valve which controls the amount of the flow,  flow tube, and filter of drier to excess extra moisture, and a metering device where it undergoes a rapid reduction in pressure and the refrigerant starting convert back to vapor and undergoes a large drop in temperature. 4.The cold vapor arrives in the evaporator where it absorbs and chills warming ambient air which maintains the temperature in a storage room. When refrigeration circuit is applied on a Commercial large-scale cold storage, water rather than air is circle around the evaporator. 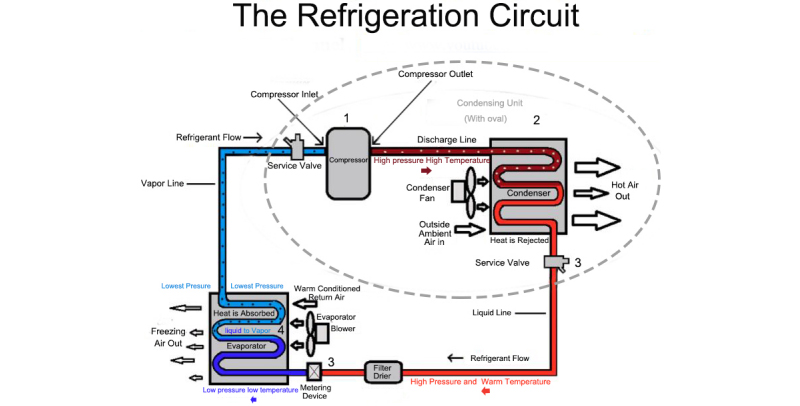 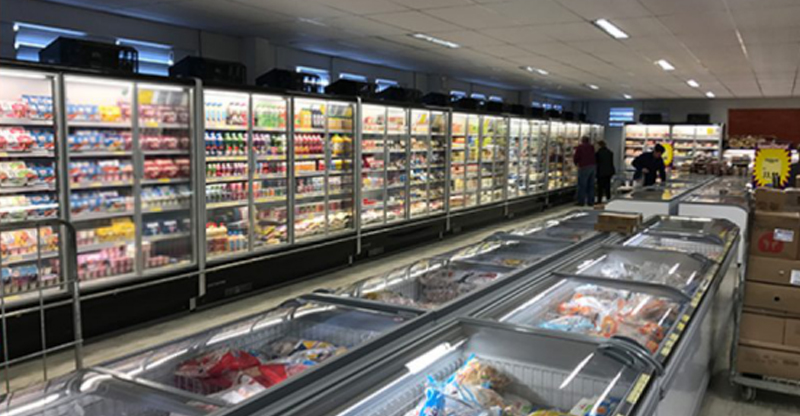 Compressors in supermarket refrigeration systems are black-colored heavy equipment located bottom of the freezers with evaporators and fans that blow freezing air. Supermarket refrigeration systems typically import compressors and evaporators with different temperature ranges. Freezing-temperature for packaged seafood and dumplings, and a low-temperature system for the beverage and fresh meat, and cool temperature for vegetables and fruits. Large-scale supermarkets can have parallel refrigerating systems operating at multiple temperatures and differential pressures. These systems have separated manifolds that share the outlets of the compressors that sustain pressure at a set level. And the end evaporators freezing the different food cases at different temperatures. The refrigeration control system uses pressure sensors as an integral part of that system to control the pressure and thereby overheating and over chilling in the refrigerant circuit.

.Some evaporators in large supermarket that use chilled water typically are called the rooftop chillers. In rooftop chillers, there are extra pressure sensors used to control the pumps that distribute chilling water.

The refrigeration system runs at the wanted temperature until cut off by the thermostat switch，which pending by the rating of temperature controller of the fan-forced air around the evaporator.

But one pressure sensor may enough for a small refrigeration system. The most critical location is on the suction side of the compressor.

These systems use a switch to sense the amount of pressure in the system. Insufficient pressure indicates there has been a refrigerant leak that may lead to an overheated compressor and possible damage.

Stainless steel is the only material touching the refrigerant and most of the pressure sensors have applied stainless steel housing. Most refrigeration pressure sensors are built using ceramic-capacitive with piezo-resistive foil technology. The sensing element in ceramic-capacitive sensors consists of a ceramic body bonded to a thin diaphragm. As pressure is applied to the diaphragm, it deflects and reduces the spacing between the plates of the capacitors, thus boosting the capacitance of the sensing capacitor. Due to the lower power consumption of silicon material sensors, the application of new silicon chips has become more and more popular in recent years.

Wheatstone-bridge is applied between two steel shell and a rippled foil. When The foil bulges under pressure,  unbalancing the Wheatstone-bridge, the bridge generating signal values according to the pressure. Because the temperature change will cause the measurement accuracy of the Wheatstone circuit to fluctuate, thereby causing errors in each range, the sensor will have a temperature compensation circuit to correct these error values

How the Pressure Transmitters Work